I know I sound like a broken record, but our weather has been so abysmal.  As a result, we had a relatively uneventful weekend.

Saturday, we did have some sunshine and warmer temperatures in the afternoon.  We decided to try a new restaurant for lunch and then visited a new park so the boys could play and burn off some energy.  They had fun and W has become quite the expert on the monkey bars.  I have basically zero upper body strength so I’m impressed with how easily he navigates those bars! 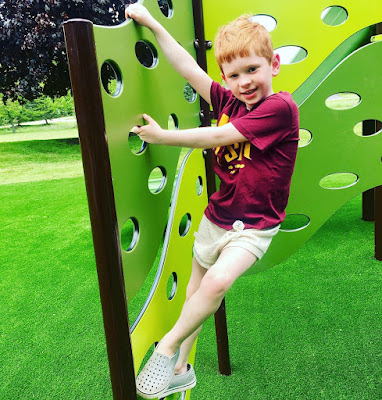 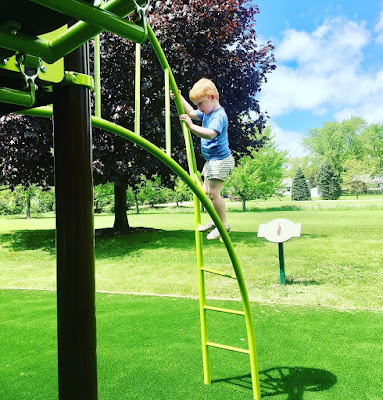 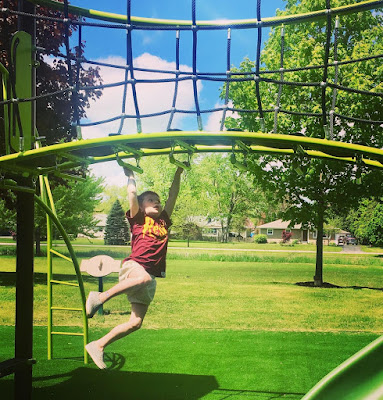 Sunday was our usual routine with errands thrown in.  It was a chilly, gloomy day so we didn’t spend much time outside.  I really can’t remember what we did aside from grocery shopping and cleaning.

Monday consisted of more errands in the morning.  I signed up to bring raspberry sorbet to S’s preschool celebration on Friday.  The school requires a very specific brand for allergy reasons.  I went to four different grocery stores and none of them carried it.  So frustrating.  The boys joined me and they were such good company despite a somewhat unsuccessful trip.  Nani, Papa, and my mom came over for a cook out in the afternoon.  I wish we could’ve sat outside, but once again, it was rainy and cold.  Ugh.  On the bright side, the food was delish (I ate so so much!) and we all had fun.  We finished the day by watching Toy Story 3.  I think this might be the first Disney movie the boys requested to watch and I *think* they actually watched the whole thing… though I could be wrong.  This movie makes me cry so I’m pretty sure all three guys were appalled by my sobbing at the end – lol!!

Oh hey, look who’s actually posting the weekend recap right after the weekend!  We had lots of fun so let’s get to it.

The water heater at our townhouse is fixed for the time being, though the plumber thinks yet another part may be needed eventually.  Waiting for a text from the tenants letting us know that they have no hot water again.  This was the most frustrating experience and I hated having to arrange my work schedule around repairs!  Hoping for a reprieve from scheduling plumbers.

Saturday, began with swimming.  Afterwards, I suggested to A that we grab drinks at Starbucks and then head to the park.  It was a beautiful morning and the boys were desperately in need of fresh air.  I’ll pause here and say that I was feeling pretty down towards the end of the week – with the townhouse fiasco and the news about trade wars and Alabama, it just seemed like things were sort of falling apart.  Clearly, I need to turn off the news.  But being outside in the sunshine was so uplifting.  At the park, A held a gate for a man and his kids and he told A that he had a beautiful family.  It was so sweet and a really great reminder that there is so much good in so many people. 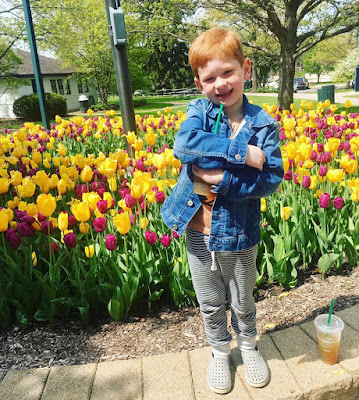 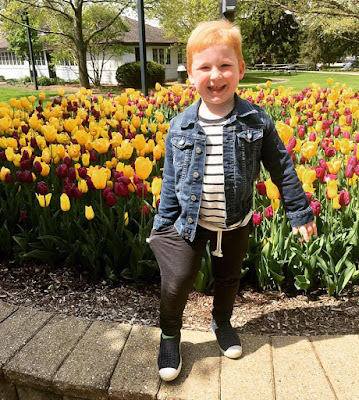 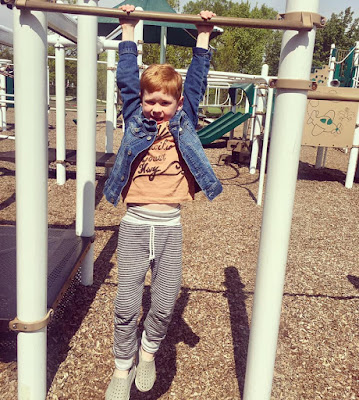 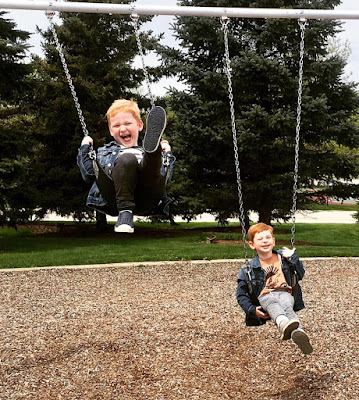 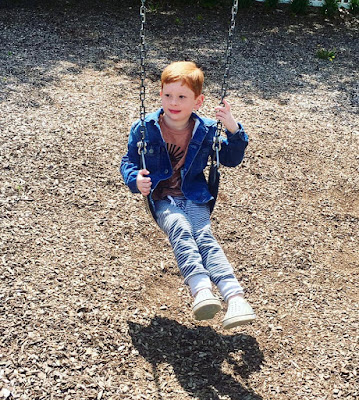 We spent over an hour at the park and then grabbed lunch.  I had planned to make dinner, but none of us were very hungry.  Instead, we made a very healthy choice and had ice cream for dinner.  This may have also had something to do with the long week we experienced.  And I don’t even feel bad about it.

Sunday, the forecast called for rain all day.  I was pretty devastated because the preschool carnival was scheduled and it takes place rain or shine.  Serving on the board, I also know how much the carnival means to the preschool’s revenue and given the weather forecast, things weren’t looking good.  Even though rain was expected over night and then all of Sunday, I woke up to sunshine and was rather shocked.  I had been checking the forecast hourly like a crazy person the night before and sunshine did not appear in the forecast at all.  We headed to church and came out to a sprinkle of rain.  I was worried, but it stopped quickly.  I continued to check the weather and there was still a chance throughout the afternoon.  We decided to arrive at the carnival right when it started anticipating that we would leave if/when it started to rain.  Time ticked by and it never rained.  As cheesy as it sounds, it almost felt miraculous.  It was a bit windy, but there was plenty of sunshine and warm temperatures.  The boys enjoyed the petting zoo, games, pony rides, and snacks.  We left tired and (mostly) happy.  S was sad he didn’t win the “chip game”.  I still can’t believe it never rained... what a gift! 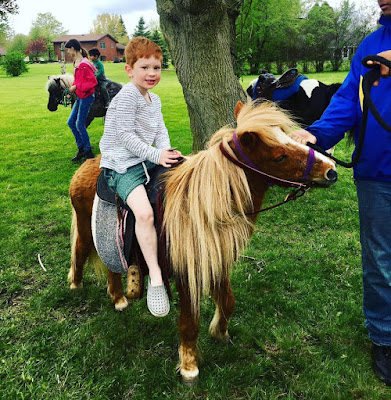 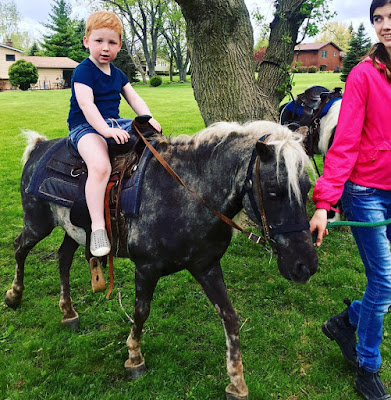 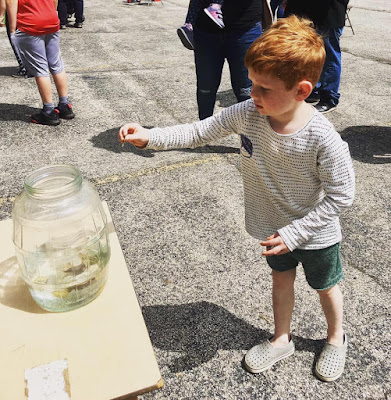 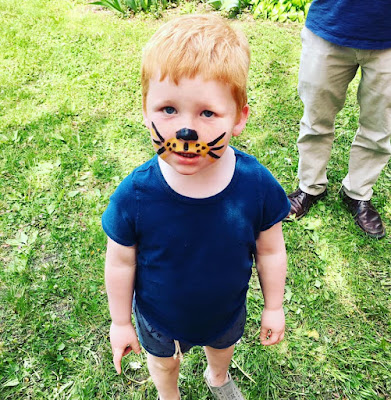 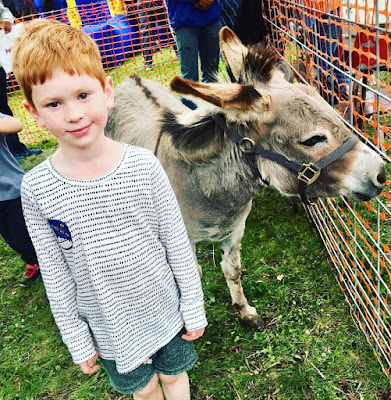 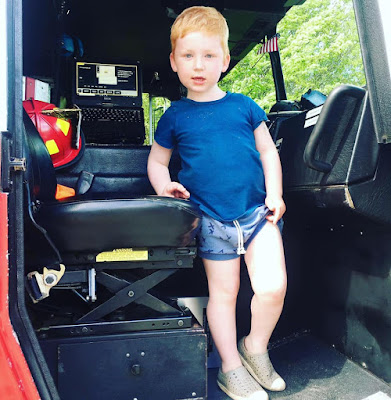 Gosh, what a week.  At this rate all my weekend recaps will be posted on Friday.  The week started with a text from our townhouse tenants on Sunday indicating they had no hot water.  I headed to the townhouse on Monday to let the plumber in.  Parts had to be ordered.  My mom let the plumber in on Tuesday and we thought the repair was complete.  Tuesday night, the tenants let us know they had no hot water yet again.  So I headed back to the townhouse on Wednesday and let the plumber in again.  Once again, a part had to be ordered.  Thursday, I left work around noon and stopped by the townhouse yet again to pick up the part that had been delivered.  I called the plumber to find out when they could come over and was told no one was available.  At this point I was furious.  A is taking time off to let the plumber in today for what we hope is the final repair.  I’ve had it with this ridiculousness and will never use this company again.  To make it even more frustrating, the house was supposed to be sold over a month ago and closing dates keep getting postponed.

I also had a school board meeting on Wednesday night and didn’t get home until 11pm so I’m ready to be done with this week.

But back to the point of this post… Weekend Recap.  So the Weekend consisted of Mother’s Day and A always makes sure I have the best weekend!  It started Saturday morning.  The boys woke up some time around 6am and I started to get up, but A told me to sleep in and he would take the boys to swim class.  I’m a girl who loves her sleep and I definitely wasn’t going to argue.  A even came back with coffee and a bagel.  Best husband ever!!  We decided to try a new restaurant for lunch, which happened to be at a nearby mall.  The food was pretty good and afterwards, S got to pick out his own t-ball bat.  After that, it was off to haircuts for the boys.

Sunday consisted of our usual morning routine.  The boys gifted me little art projects they worked on in class.  These are always a favorite!  A gifted me the best  comfy joggers, a facial mask crème that I’ve been eyeing, and a new book.  All items to help me feel comfortable and relaxed.  They were wonderful.  I also received a salon gift card and chocolates from Nani.  All of these items were absolutely perfect.  We had to stop at the grocery store for a couple items and quite a few strangers even wished me a happy Mother’s Day.  I thought it was so sweet and completely unexpected.  I wish I could say our weather was nice, but it was freezing.  We’ve had such a cold, rainy spring.  But otherwise, it was a perfect weekend! 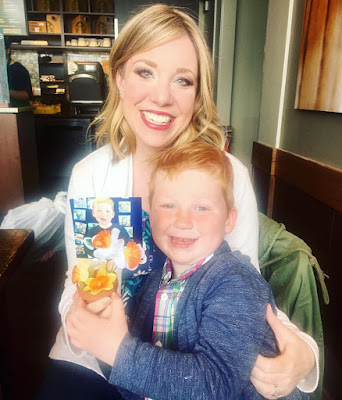 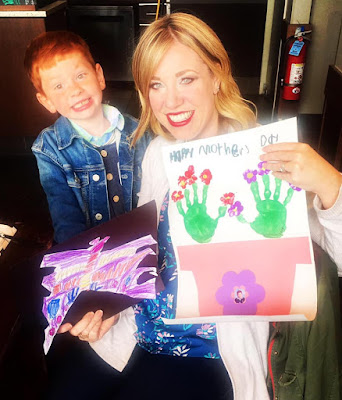 I am really slacking on the weekend recap.  I had two all day work meetings this week and it just threw things off.  I’ve been playing catch up ever since.

Last Friday evening, A and I were relaxing.  The kids had finally gone to bed, A was reading, and I was scrolling mindlessly though my phone.  We suddenly heard this massive boom.  I jumped and so did A.  He asked if it was thunder and I responded that I hoped it was.  What else could it be?  I even looked at the weather radar on my phone.  We had rain, but there was no evidence of a storm.  A short time later we started hearing sirens.  Soon, A started getting text messages that a nearby building had exploded.  4 people were killed and 3 were taken to the hospital, but after seeing the shell of the building that once stood, it’s shocking that more people weren’t hurt.  Even more ironic, my dad worked in that exact building.  It was a different company back then, but I was even in it as a little girl.  We drive passed it at least three times per week.  A scary start to the weekend.

Saturday started with the boys acting crazy.  I can’t think of a better way to describe their behavior.  I think I’ve mentioned that our weather has been miserable and the boys have had too much energy.  They haven’t been getting the fresh air they need and it’s evident.  Long story short, A and I have been taking away some “privileges” and they’ve finally begun to realize that their actions have serious consequences.  To be clear, we’d taken away screen time and toys previously, but we started taking away higher value type items and that made an impact.  Saturday morning was tough, but we were finally able to get outside and by afternoon, the boys were back to their usual pretty good behavior.

I can’t remember if it was Saturday or Sunday now, but we ended up at a park with tennis courts and A and I had so much fun hitting the ball back and forth – though I am super rusty!  We spent much of the weekend outside and it was exactly what the boys needed.

A had CF clinic on Tuesday.  We knew there was a chance that his lung function may be a bit down since he’s been battling a cold.  It was in fact a little down, but nothing significant.  A has been doing two vest cycles per day since receiving his Afflovest and he started Cayston recently so hoping his lung function bounces back up quickly.  I’ll have to get him out on the tennis court more often. J

Speaking of tennis, W started tennis lessons yesterday and I’m loving it.  Watching him hit the ball brings back such fond memories of high school tennis.  I promise I won’t be one of those moms who forces their kids to pursue their own interests.  W has been asking to play and I’m enjoying that he’s enjoying it. 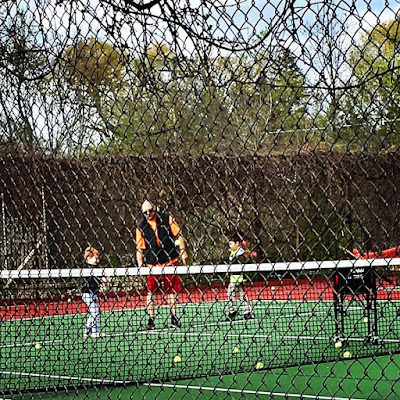 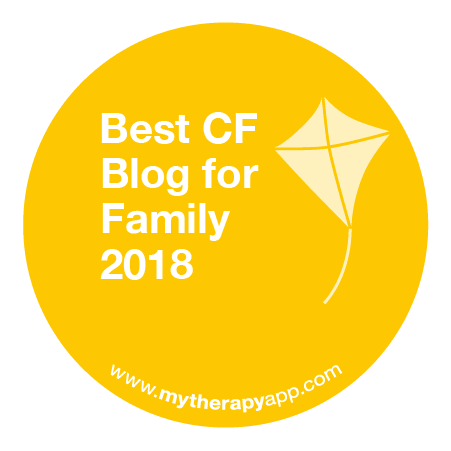